SP101 Flooring Plywood® is constructed with environmental sustainability at its core. Every sheet is comprised of legally verifiable timber from well-managed forests.

SP101 Flooring Plywood® was the first flooring plywood to be imported into the UK with a FLEGT Licence.

The timber in SP101 Flooring Plywood® is sourced from Indonesia; a country comprised of well over 13,000 islands with over 91 million hectares of forest cover. Forest cover has steadily declined over the past few decades due to a lack of infrastructure, uninformed management of these resources, the rise of palm oil production and illegal logging.  However, recent revolutionary changes in forest legislation, governance and management have made an instant impact on these factors and contributed to the reforestation and conservation of one of the most bio-diverse countries in the world.

Indonesia is the first country in the World to complete the process of a Voluntary Partnership Agreement (VPA) with the European Union, legally obligating the country to implement a licensing scheme to regulate trade in timber and timber products. Currently, this means that all timber exported from Indonesia has to be fully traceable and certified under Indonesia’s country-wide Timber Legality Assurance Scheme; SVLK.

SVLK (Sistem Verifikasi Legalitas Kayu) was developed through multi-stakeholder consultations and, by process of further modification, became a nation-wide scheme which offers market incentives for legal compliance (timber cannot be exported without supplying evidence that it complies with SVLK). Alongside this, the Indonesian Ministry of Environment & Forestry developed an online system (SIPUHH Online) which tracks logs all the way back to the concession using a QR barcode-scanning system.

SVLK is now the first timber legality assurance scheme to be recognised by the European Union Timber Regulation (EUTR) as a framework that assures the legality of timber sourced in Indonesia.

All timber products certified under SVLK and exported from Indonesia are now FLEGT Licenced as of November 2016. A FLEGT Licence is currently the only licence that ensures full, verifiable compliance with the European Union Timber Regulation.

The manufacturers of SP101 Flooring Plywood®, PT. Kutai Timber Indonesia (KTI), source the Falcata (Paraserianthes falcataria) that is present in the core of panel thicknesses 9mm and up from what they call Social Forestry Plantations. This is a self-funded initiative that the mill started in 2001.

KTI grow and nurture Falcata seedlings until they are approximately 3 months old. In this time, the saplings are regularly watered and cared for to ensure that they grow to their optimum potential.

The saplings are then distributed to the local community free of charge so that they may be planted by farmers. A Falcata tree will take 5-7 years to reach maturity and in that time the local community will utilise the trees’ canopy to grow ginger, coffee and a variety of herbs and spices that thrive in the shade of tropical environments.

Since 2001, the Social Forestry Plantation program has seen the distribution of over 22 million seedlings covering 22,000 hectares of land.

Once the Falcata trees reach maturity, they are cut down to make room for new growth. The farmers who have looked after the trees for 5-7 years then have the option to sell the logs back to KTI or sell them to a competing mill for a better price. The livelihood of the farmers who have patiently nurtured the trees is always prioritised and respected.

Logs sold back to KTI are taken to community-operated sawing stations. Machinery used at these stations are contributed by KTI and regularly calibrated and monitored by selected staff.

The Forest Stewardship Council® is an organisation focused on the preservation and sustainable management of forests. The organisation is driven by ‘The 10 FSC® Principles’ which apply to all FSC® Certified forest management units. These principles help shape appropriate systems for the management of forest activities and ensures that FSC® certified products are sourced with the rights of indigenous people, workers’ rights, employment conditions, protection of high conservation values and environmental preservation in mind.

Currently, over 190 million hectares of forest are FSC® certified, in over 80 countries worldwide.

Currently, this certificate covers 1,004.55 hectares of land with an annual allowable cut of 11,978.55 m3 for Falcata alone. The annual allowable cut is calculated in order to ensure that the intensity of harvesting is ‘at or below a level which can be permanently sustained’ as set out by the FSC®‘s ‘Principle 5’.

In 2016, the owners of the certified plantations in KTI’s Social Forestry program harvested a total of 5,066.17 m3; that is less than half the amount deemed by the Forest Stewardship Council® and Soil Association as being at a sustainable level.

Despite not reaching anywhere near the limit of harvesting, KTI still have no issue with the volume of Falcata logs that comprise the core of SP101 Flooring Plywood®.

As the importers of SP101 Flooring Plywood® , Hanson Plywood hold an FSC®Chain of Custody Certificate that enables the distribution of FSC® Certified SP101 where requested.

The face and back veneers of SP101 Flooring Plywood®  are constructed with mainly Meranti (Shorea spp.). There are roughly 148 listed species in the Shorea genus which includes those species referred to commercially as Meranti. The multitude of different species is one of the main reasons for the natural variation of density and colour in the timbers used in plywood construction.

KTI source Meranti logs from Kalimantan, the Indonesian-owned part of the island of Borneo. This area consists of approximately 53.6 million hectares of land (that’s over 80 million football pitches). Of this amount, Kalimantan’s current forest cover 49.3 million hectares according to Global Forest Watch. Historically, the Borneo Rainforest has been the subject to severe commercial exploitation of its resources resulting in deforestation and damage to local ecology.

Deforestation can be driven by many different factors (e.g. conversion of forest for agricultural purposes, forest fires, flooding and more) but Indonesia have made great strides in combating one of the main drivers; illegal logging. While illegal logging is by no means fully abolished, Indonesia’s implementation of their timber legality assurance system has been effective in restricting the sale of illegally harvested logs.

You can see all legal forest concessions in Kalimantan in the yellow fields of the map below. All concessions are SVLK certified (see above under FLEGT information) and the information below is provided by Indonesia’s Ministry of Environment & Forestry. 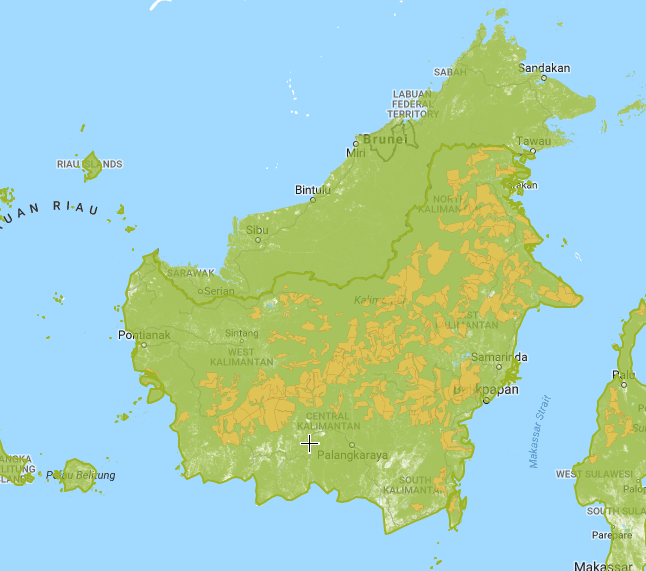 The Meranti found in SP101 Flooring Plywood®  is sourced only from legally verifiable concessions which can be found above.

This website uses cookies to improve your experience. We'll assume you're ok with this, but you can opt-out if you wish. Accept

This website uses cookies to improve your experience while you navigate through the website. Out of these, the cookies that are categorized as necessary are stored on your browser as they are essential for the working of basic functionalities of the website. We also use third-party cookies that help us analyze and understand how you use this website. These cookies will be stored in your browser only with your consent. You also have the option to opt-out of these cookies. But opting out of some of these cookies may affect your browsing experience.
Necessary Always Enabled

Any cookies that may not be particularly necessary for the website to function and is used specifically to collect user personal data via analytics, ads, other embedded contents are termed as non-necessary cookies. It is mandatory to procure user consent prior to running these cookies on your website.